The Good News and the Bad News 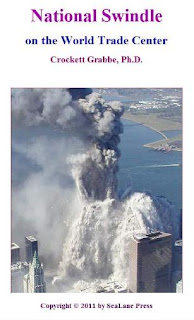 The good news is that physicist Dr. Crockett Grabbe’s ebook National Swindle of the World Trade Center is now available on Amazon.com. The book is 7 chapters long, roughly 113 pages in length, and delivers strong, responsible scientific evidence that the WTC buildings were brought down with explosives.


The bad news is that someone from the DEW crowd just had to show up and start trouble. After having written a review of Dr. Grabbe’s book, someone by the name of “Emmanuel Goldstein” posted a long negative 1-star review of the book. His criticism is common amongst DEW advocates; loaded assertions, baseless accusations, and outright falsities. I responded to his review in the comments, which unfortunately started a long and ultimately pointless debate. I asked this person many times to address the steel found at Ground Zero, but he did not. I find it funny how the DEW people are so keen on ignoring this point, which is the crux of their whole argument; that the steel from the Towers was “dustified.” I’ve had run-ins with DEW people before, and it never ends well. I always hope in vain that eventually I’ll manage to reach just one of them. But it becomes painfully obvious all the time that this is just wishful thinking on my part. 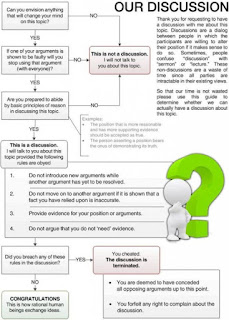 My advice to anyone who runs into people like this: just ignore them. That is, if you get into a discussion with one of these DEW people and they blatantly ignore the evidence you present, just end the discussion right then and there. If they’re going to ignore your arguments, then you have every reason to ignore them entirely. They have been conned by a failed engineer who has done nothing but harm the credibility of the 9/11 Truth Movement for the last half a decade. However, if on the off chance that a DEW advocate is willing to listen to valid criticisms of Judy Wood’s hypothesis, then by all means continue the discussion. I doubt you’ll find someone like that, but anything’s possible.
To see where my debate with Mr. “Goldstein” currently stands, follow this link. Please keep in mind that I have responded to every one of his points, whereas he has responded to hardly anything I’ve said. Instead of addressing me directly, he continues to rehash the same debunked points, and is also under the impression I’m YouTuber “exposethebunk.” Twice now I’ve had to inform him that is not me. Will he believe me eventually? I doubt it. If these people can look at the photographs of Ground Zero and still believe that the steel was “dustified,” then it’s hardly surprising that they would believe me to be somebody I’m not.
*UPDATE* 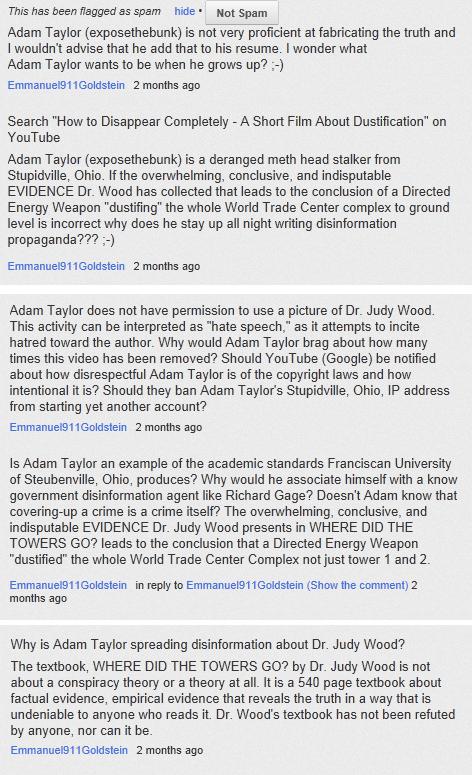 And now we come to this:

These people are pathetic.
Posted by Adam Taylor at 1:35 AM