One thing I'd hope we'd be done with at this point in the 9/11 Truth Movement is the bickering over what really happened at the Pentagon. For me, the evidence is clear that a plane really did hit the building, and that it was Flight 77. But some people just won't let this topic die, and insist the ludicrous idea that no plane hit. One of those people is Craig McKee, a "researcher" in the movement who recently posted another long rambling complaint over why people think he's full of shit. Like most Pentagon no-planers (or just no-planers in general), Craig is fond of pretending that anyone who disagrees with him is out to get him and push some sort of agenda. Of some of these people he writes:


The team of researchers I mentioned – which includes Chandler, Jenkins, Frank Legge, John Wyndham, Jonathan Cole, Jim Hoffman, Victoria Ashley, and others – keeps repackaging the same discredited ideas about the Pentagon into one “scholarly paper” after another. They repeat frequently how they are using “the scientific method” while those who disagree are suffering from “confirmation bias” (which means favoring information that confirms existing beliefs).

Personally, I suspect folks like Hoffman, Legge, Cole, Chandler, etc. are probably just getting bored with this issue at this point. So am I. Craig goes over what fantastic evidence he has that no plane hit the Pentagon, but has he done anything with this evidence? That is, is he ever going to try and use this "evidence" to help get us a new investigation, or just post his ramblings on his blog and and pretend like he's beaten everyone else in a debate? I'm not holding my breath.

Craig brings up ten questions that MUST be answered to show a plane hit the building. I'll put aside the fact that these questions have doubtlessly been answered before, but let's be nice and give it another go.
I don't know, why would eyewitnesses say the Titanic split in two as it sank, but others say it sank in one piece? Why would thousands of people say they saw the sun zig-zag throughout the sky, when no one else in the world saw that? Could it possibly be because eyewitness evidence is known to be unreliable? Craig wants to put so much emphasis on the type of evidence that is literally the leading cause of most wrongful convictions. Besides, other eyewitnesses contradict these dozen or so witnesses, and the vast majority of them--even the ones cited by Craig--say they saw the plane hit the building.
I would honestly like any Pentagon no-planer to explain to me what airplane wings should look like after they've hit a reinforced masonry building at over 500 mph. How big do you think the pieces should be? Care to calculate how much force will be applied to the wings and work out what sort of state they'd be in afterwards? Please, draw it out for me if you need to. I'm fine accepting the idea that maybe, just maybe aluminum wings are not going to stand up very well to a building like the Pentagon at over 500 mph.

It didn't enter a hole "much smaller than required." Perhaps you missed the fact that there was a plane-shaped hole in the wall after the plane hit. 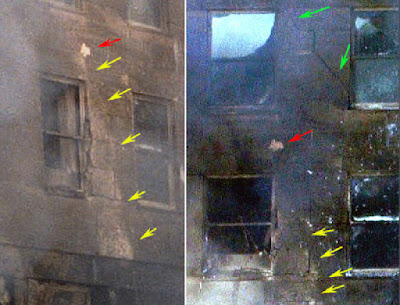 Seriously Craig, glasses aren't that expensive these days. Oh, and if you think that's not enough damage, maybe remember the Pentagon was built to be a wee bit stronger than a normal building.
Because there's more fuselage than wing mass and tail mass. Yes, the front of the fuselage may not be able to do much, but there's tons more plane behind it coming in. And the Pentagon had quite a bit of open space, so once it got through the front wall there wasn't much left to stop it.

Who said it was "thousands of pounds" of debris outside? Again, pretty sure much of the larger, heavier debris found its way inside the building. That's what we should expect to happen. Small debris outside, large debris inside. Repeat that and maybe it will sink in eventually.
You know Craig, Google is a thing that exists. Here, let me show you.
Gee, couldn't possibly be all that plane debris right in front of the hole, could it? The hole might look odd at first, but it's consistent with damage from a plane strike.
I'm including these last two together for a reason. You might have wondered why I titled this post calling Craig a liar. Well, his last bit of "evidence", like all the rest, is wrong, but the fact is that he knows it's wrong. And he knows it's wrong because I pointed out to him that it's wrong. The point about the two video frames being out of sync is in reference to this point Craig made earlier in his post:


In September 11: The New Pearl Harbor we see video frames from two Pentagon cameras that were synchronized using a “multiplexer” system. About 100 frames were common to both sets and matched each other perfectly as confirmed by comparing the shape of the smoke cloud. http://luogocomune.net/site/modules/sections/index.php?op=viewarticle&artid=167 All except one. Just one of these 100 frames does not match, and that is “frame 23,” the very one that allegedly shows a 757 crossing the Pentagon lawn. There is no doubt that frame 23 was doctored either in one set of frames or both.

I wrote about this before, but apparently I have to go over this again. What is claimed in the film is that the two frames featured below are out of sync and that one camera shows the whole plane and the other shows only "the tip of the plane."

Second camera image.
Note the film claims that where the arrow
is pointing is "the tip of the plane."

What the film says is the tip of the plane is actually the leading edge of the smoke trail left by one of the plane's engines. 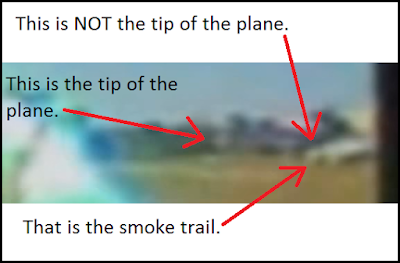 The fact that this video shows a plane is all the more clear when higher resolution images are used. Of course, some will probably say this is "enhanced" or "manipulated footage" (as I was accused of using by some of Mr. McKee's ilk). However, a recent study by David Chandler and Nathan Flach uses video footage from the original sources, and they are also of high quality and show the plane.

Now I pointed this out in my previously mentioned post, and a second time to Craig over Facebook. How did he respond?

That's right, with more denial. The frames are clearly not out of sync, and the film is wrong to call that the tip of the plane. To my knowledge, Craig has never acknowledged this. And I'm willing to bet he never will. Craig spends some time talking about confirmation bias, but if there ever was someone to have it, it's him. He basically gives the whole game away when he answers the question "Can’t it be an inside job even if we support an impact?" by saying this:


Yes, but when we discard some of the most powerful evidence we have, the case against the official story is much weaker.

A translation for those who might not have gotten it: Yes, we might be wrong about this, but it's more important for us to use this to make our case, rather than being factually accurate.

The ends justify the means. This tells me Craig really doesn't care if this is factually correct or not. He just wants to prove 9/11 was an inside job, and since this would really convince people, he's just gonna run with it. This is standard religious apologetic logic, not objective research. I am convinced more and more that Craig is just willing to lie if he thinks that will get us a new investigation. So Craig, I've now told you not once, not twice, but THREE times the film is wrong about this. Are you ever going to admit this? You've "responded" twice, and I'm giving you one more shot. But strike three and you're out pal. What's it gonna be? Oh, and don't bother trying to edit your post to save face, because as we all know, the internet never forgets.

Continue to peddle this disinfo, and I'm forced to conclude that you are simply a pathological liar. But then, your post shows you're apparently a fan of Erich von Däniken, another pathological liar. Like teacher like student, eh?